The Wizard's history of MERLIN

In '73 and '75 I sailed Transpac on PANACHE, a boat I designed and built. We didn't win, but another boat I built, CHUTZPAH won the overall on both of those years. Transpac has great finish parties right there on the spot when each boat finishes.

In 1975 I went to all of the parties except for those of the nine boats that beat us in. That was not going to happen again. In early '76 I committed to the MERLIN project. Our building had a 12 foot ceiling and we needed to turn the boat over so we kept beam at 12 feet. Our target was not the old 9 day, 9 hour WINDWARD PASSAGE record, but the unofficial record Eric Taberly set with his trimaran PEN DUICK III some years previous of 8 days 13 hours. Mission accomplished.

Now onto the Santa Cruz 70's. In November of 1991, The Transpac committee set a handicap limit for the 1993 race of IOR 70.0. This was becoming the international limit and Transpac as a world class event wanted to syncronize with the world. Needless to say, the change from limited to unlimited was hotly debated but the decision stuck. I thought up the Santa Cruz 70 project sailing across from Mazatlan to Cabo on a C&C 40 in 1973.

We wanted to go as fast or faster than the MERLIN, but not rate over 70 IOR. IOR stands for "invest or retire" The IOR greatly favors beam and bumps. 1 foot of beam is 40 square feet of sail area. .1 feet of CMDI is a bunch more sail area. Neither design has any distortion aft, however the SC 70 has 3 feet of extra beam mostly above the waterline and CMDI and FDI bumps. A bonus of the beam is extra power to carry sail. 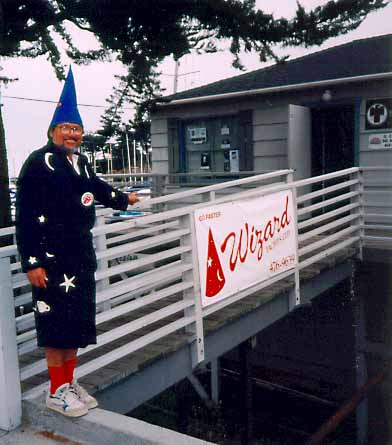 In hard running and depending upon sail area of the respective boats, we have often found MERLIN to be very slightly faster at the top end. Dan Sinclair reports speeds of 25 knots in the Molekai Channel. As to the turbo projects for '95, the PYEWACKET (SC 70) and the CHEVAL II (A70) sported 85' +/- carbon fiber rigs, new keels and 25'+ spinnaker poles. The MERLIN had a 73 foot aluminum rig, 25'+ pole and spinnakers almost as large as the turbo boats, but with overlength luff's as opposed to being set on a taller mast. The taller mast has a big bonus as it allows a larger mainsail.

Look at the Wizard's Photo Album.